I was sorely disappointed by the cardboard cranes out of the crappy magnetism book Cedar and I have been playing with for the past few days, so he and I took a few hours yesterday to build a crane that he and his sister can experiment with. I asked him to draw a crane, and this is what he came up with: 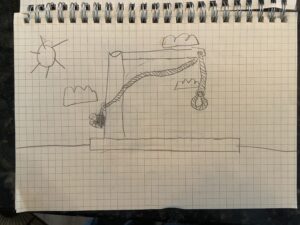 C: “Sorry Dad, it kind of looks like that…hanging thing.”
B: “A gallows”?
C: “Yeah, yeah. A gallows.”
B: “No worries my man, I think a gallows and a crane have generally the same design requirements, just at different scales.”

I think he first came into contact with the gallows in Time Bandits, but I know for sure that he saw them recently in Pirates of the Caribbean 2: Dead Man’s Chest which while PG-13 I boldly dared show both him and his 3.5 year old sister this past Weekend of Covid [1]Serendipitously, I read Mike Sumankowski’s Why Am I OK With My Kid Watching Violence But Not Sex this morning, and am still musing over it. My parents long held that they’d rather show us … Continue reading.

Once he’d drafted the overall crane elevation drawing, I pitched in and drew up the plan drawing. 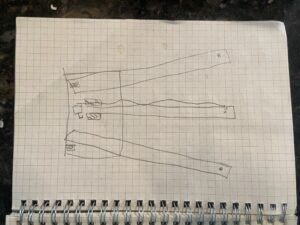 This confused him no end, until I showed him an engine hoist: 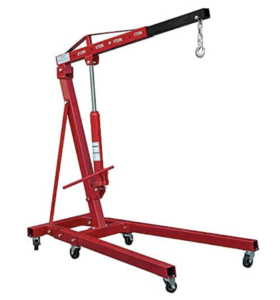 At which point all became clear.

We then put on our winter garage wear, and banged together a hilariously overbuilt crane for him and his sister to experiment with: 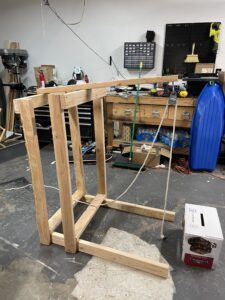 In this project I introduced:

The impact driver was particularly challenging, in part because I think the torx bits that I have on hand are a little too small for the wood screws that we were using. That meant the poor kid had to be super careful about getting the screws started in the wood before he could bear down on them. However, after a bit of wailing over how difficult it was to keep the driver lined up on the screw axis, he figured it out and started sinking screws pretty damn efficiently.

Most importantly, the new toy kept him and his sister occupied in the garage for two glorious television free hours while Kara and I got to cuddle on the couch.